Hamstrung: Malcolm Kelly's Latest Setback Should Be The Last Straw

Malcolm Kelly's career has been an incredible disappointment, and it's now time for the Redskins to part ways with the oft-injured Vinny Cerrato draft pick.

Share All sharing options for: Hamstrung: Malcolm Kelly's Latest Setback Should Be The Last Straw

I have been in many a debate with different people regarding Malcolm Kelly and his prospects as a future NFL starter. I'll be honest: I've never been a fan. The guy has yet to even prove himself as a legitimate NFL-caliber player much less a starter.

I hate to say it but at this point, you have to say that Kelly is a colossal bust. The Redskins have tried to find him a role offensively (including featuring him on one of this year's season tickets), but every experiment has gone up in smoke. You can use any excuse you want for him, be it injuries, a lack of playing time, a poor offensive gameplanning, etc., but the fact is Kelly has been very bad during his two-plus years in the NFL. Maybe it's time head coach Mike Shanahan continued the trend of "out with the old and in with the new," because Kelly's failure to launch in the NFL is just a further testament to the ineptitude of the previous regime. 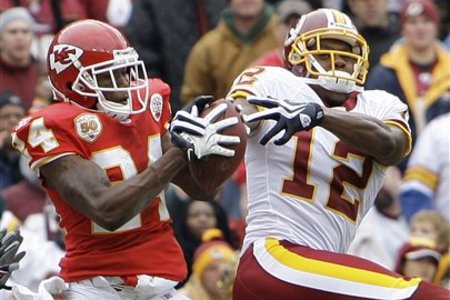 Kelly was projected by some as a first round pick, but he fell into the second round largely due to injury concerns. The Redskins scooped him up with the 51st pick of the draft and almost right away, issues began to flare up. Kelly came to training camp out of shape and clueless when it came to playing football. His route running was poor and occasionally he seemed lost on the field, not knowing where to line up. Needless to say, he failed to make much of an impact his rookie year, playing in just five games while catching three passes for 18 yards. He battled knee problems, which limited his playing time and his ability to grasp the NFL game.

I gave him a free pass for his rookie season, chalking it up to bad luck. Kelly would bounce back in 2009 or so I thought. In 2009, he initially made strides by winning a starting receiving job in training camp, but after five starts was replaced by Devin Thomas. In those starts, Kelly had just seven catches for 73 yards and zero touchdowns. He had 25 catches on the year for 347 yards.

But as underwhelming as his performance was in 2009, things only got worse this past offseason. In July, Kelly injured his hamstring the week before training camp while participating in new Redskins QB Donovan McNabb's "Hell Week" in Arizona. Kelly practiced the first day of camp, but missed the remainder of it due to his sore hamstring. He said he wasn't worried about missing time because he would prove himself in the preseason games. But he missed games against Buffalo, Baltimore and New York, leaving him with just one shot to prove himself to the coaching staff.

Kelly took the field this past Monday to prepare for Thursday's game against the Arizona Cardinals, but re-injured his hamstring in the first few minutes of practice. Shanahan called it a "pretty good pull," and then on Tuesday the Redskins placed Kelly on the injured reserve, ending his season. 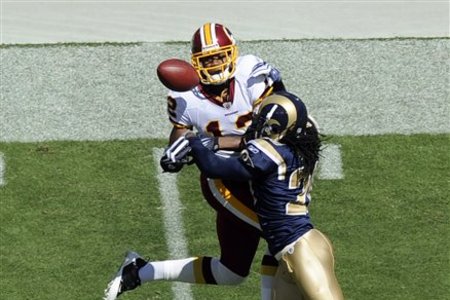 This latest news for Kelly doesn't bode well for his future. In his career, he has yet to earn a roster spot by his actual performance in the NFL. He's made of a living off his draft status and 6-5, 226-pound frame.

The Redskins wide receiving corps lacks size, which is something Kelly possesses in spades. Thomas is the only other receiver on the team with comparable size, and Washington desperately needs to have him or Kelly eventually produce and create mismatches on offense. So you could say Kelly's stature has kept him employed and paid the bills since his numbers can't.

However, he may have finally run out of chances.

Despite his gargantuan frame, I don't think Kelly ever stood out in any one of his 21 games played with the ‘Skins. His first step off the line was average at best; his ability to get separation was non-existent. Route-running wasn't exactly a strength, but to his credit, Shanahan reportedly said that he had the best hands on the team.

Excuse the past tense as Kelly is still a member of the Redskins organization, but I feel it's justified. Kelly's mediocre career has done nothing to deserve a spot in 2011.

If Shanahan believed in him, you wouldn't have seen him placed on the IR for a hamstring pull right away. The Redskins would certainly have been patient and waited to see if he could play a few weeks down the road, right? I mean I can't recall a player missing an entire season with a hammy.

However, knowing Kelly's injury-prone history, Shanahan opted to end the young receiver's season abruptly while keeping him with the team for next year.

What does that really mean for Kelly? Apparently, the Redskins don't want to cut him outright, but he failed to make a strong enough impression that Washington was going to give him a roster spot this season and then wait around for him to recuperate. So instead of simply releasing him, the Redskins decided to stash him on the IR because, despite this inexplicable knack for failing to live up to his potential, they still covet his size.

I realize Randy Moss-sized receivers are tough to stumble across, but when you find one, you might want to ensure he can also ball like Moss. Kelly can't.

I don't necessarily blame the organization as they continue holding out hope for him to develop as a receiver, but in light of his latest setback it might be time to pull the plug on another failed Vinny Cerrato product. 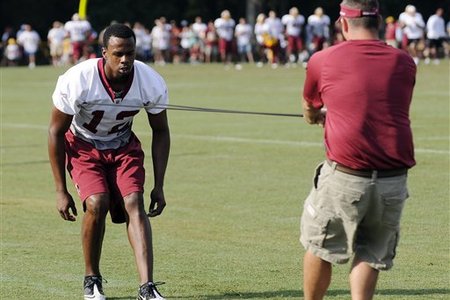