Maryland Vs. Navy: Missed Opportunities Costing Navy As They Trail 14-7 At Halftime

Share All sharing options for: Maryland Vs. Navy: Missed Opportunities Costing Navy As They Trail 14-7 At Halftime

It's halftime at the Crab Bowl at M&T Bank Stadium, and Maryland leads Navy 14-7. The Terps raced off to a fast start, but Navy has dominated the game since. Unfortunately for Navy, they've missed several major opportunities to take the lead in this game. The Midshipmen have been inside the red zone four times already, and they only have seven points to show for it.

On their first drive of the game, Navy marched the ball down to the 15-yard line, but kicker Joe Buckley clanked a 32-yard field goal off the left upright. Then, on their third drive of the game, the Midshipmen got the ball all the way down to the one-yard line, but Maryland linebacker Adrian Moten made a spectacular play, leaping over the Navy offensive line a la LaVar Arrington and forcing quarterback Ricky Dobbs to fumble.

However, it was the third missed opportunity that was most baffling. With no timeouts left, Navy made a curious decision to attempt another option play. Dobbs ended up keeping the ball, and he was tackled inbounds at the two-yard line. Time ran out, and Navy missed an opportunity to further cut into the lead. After the play, coach Ken Niumatalolo was seen screaming at the officials. Here's a picture,

via Winfield Featherston of Georgia Tech blog From The Rumble Seat. 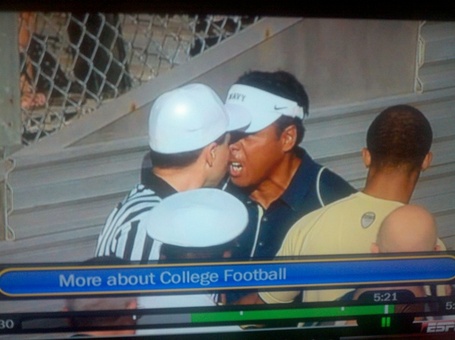