Season On The Line For Redskins This Weekend

The Redskins were a joke one year ago. This weekend's game against the Dallas Cowboys will go a long way towards proving just how much better things are this season.

Share All sharing options for: Season On The Line For Redskins This Weekend

I typically try to avoid hyperbole whenever possible, so keep that in mind when you read this next statement – the entire season in on the line when the Washington Redskins host the Dallas Cowboys this weekend.

For my money, that’s how important it is that the Mike Shanahan era get started off correctly.

Think about it. When Shanahan and friends inherited this charity case, they took over a 4-12 team. The Redskins, in case you’ve forgotten, went winless in the division in 2009 and are 3-9 in the NFC East over the last two years.

It goes without saying that a team’s success or failure in a given year depends completely on how it fares in the division. If the Redskins can’t get it done against Dallas, New York and Philadelphia again this season, then get ready for more heartache.

And I’m one of those "cautiously optimistic" fans who would happily take an 8-8 season this year – no questions asked. Seeing the Redskins double their win total from a year ago would be huge for me, and if nothing else, I could sleep easy knowing that at least the guys wearing burgundy and gold have a chance at victory any given Sunday.

That’s not something we’ve been able to say since Grandpa Gibbs headed off to the retirement home again.

If I could have handpicked any opponent for the opener, I would have happily selected the Cowboys. Think about it – there’s no bigger test than your hated rival who just so happens to believe that they’re a legitimate Super Bowl contender.

Dallas, by the way, had their way with the Redskins last season. In two games, they outscored Washington 24-6 and rarely had to break a sweat in the process. They’re also 6-1 lifetime against the Redskins in season openers.

Having Shanahan on board guarantees that the ‘Skins will at least be prepared when they take the field. But how many victories will the two-time Super Bowl winning coach realistically be able to bring in year one?

We’re about to find out. 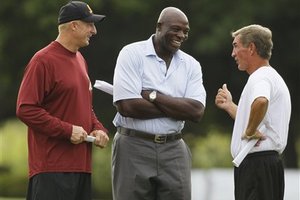 And while most of the national media’s attention has focused on the ever-popular Albert Haynesworth drama, there’s plenty to like these days if you’re a Redskins fan.

The defense, which is seemingly ranked in the top 10 year in and year out, actually appears capable of creating turnovers. It’s one thing to have a defense that statistically ranks among the league’s elite because of yards allowed per game. It’s a whole different ballgame when you have an aggressive defense that attacks for every conceivable angle.

Former defensive coordinator Greg Blache encouraged his players to read and react. The mindset was passive and turnovers were a rarity. Under Jim Haslett though, this new 3-4 defense aims to punch the opposition in the mouth. He’s a lot more like Gregg Williams than Greg Blache, and that mentality served Williams’ troops in New Orleans well last year, didn’t it?

There’s also the revamped offensive line, which features two new highly-touted tackles. Folks around town might have wanted the ‘Skins to select lineman Russell Okung with the fourth overall pick in the draft, but Trent Williams has stepped right in and killed that nonsense. He’ll have his ups and downs during his rookie campaign, but the kid has already shown he can play with the big boys.

The arrival of Jammal Brown, who will step in at right tackle, is just as huge for Washington. He’s got an impressive resume – with two Pro Bowl selections – and will hopefully enable quarterback Donovan McNabb more time in the pocket than Jason Campbell was afforded during his final season in D.C.

And speaking of McNabb and juicy storylines, he’s also got something to prove against Dallas. His last two games as a member of the Philadelphia Eagles resulted in two lopsided losses to the Cowboys, with Donovan fumbling three times and throwing an interception. I think it’s safe to say those poor outings against a hated divisional opponent might have played a part in Philly’s decision to move on without McNabb. So he’s here now and highly motivated to show his detractors that he can still be productive, even at 33. I can’t think of a better way for him to make a lasting first impression in Washington than by beating Dallas at home on primetime television. 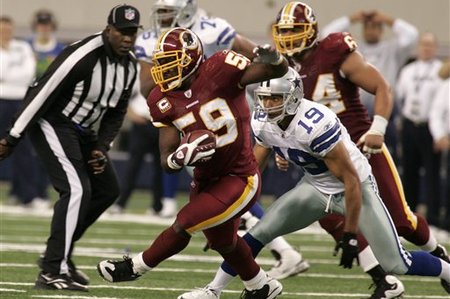 The Redskins head into this battle a huge underdog. The only people giving them a chance against the Cowboys this Sunday night are those who will be wearing burgundy and gold this weekend.

Even though their offensive line looks as susceptible as Washington’s did a year ago, the general consensus is that the Cowboys are stacked enough to win anyways. This is just a tune up for Dallas as they bide time until the lock up the division. Do they really even need to play this game?

That’s okay. Let them have the fanfare and expectations. Let ESPN continue to slurp Jerry’s kids. We all know that as long as Tony Romo is the quarterback and playoff games are played in January, there’s no chance the Cowboys will be a part of the Super Bowl in Texas Stadium (unless they buy a ticket).

The Redskins were a 4-12 team a year ago. This weekend, with the nation’s eyes locked on them, we’ll see just what kind of squad they’ve got this season.