As has been noted multiple times on this very site, the 2011 Army-Navy Game will feature both teams wearing Nike Pro Combat uniforms. We've already seen glimpses of the jerseys the Midshipmen will be wearing on Saturday. Now, thanks to Yahoo! Sports' Dr. Saturday blog, we can see the two uniforms side-by-side.

Photo below the jump: 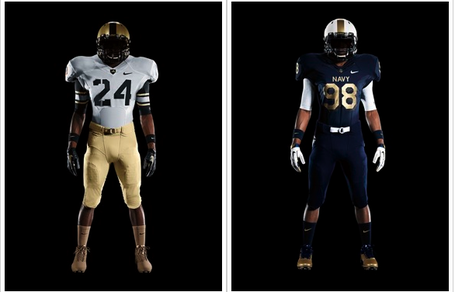 Both uniforms are simple and elegant, just as they should be. In 2008, Army whipped out a camouflage uniform, and it did not go over well. We're talking about service academies here. There's no reason to step out and do something wacky when simple will do.

Series History: Navy leads the overall series with a 55-49-7 record, including nine wins in a row.