In the interview, Snyder proclaimed that he wants to start a "new tradition" and bring the game to Washington D.C. "every few years." Given that the Naval Academy's base is less than an hour from the stadium, such a tradition makes sense.

At some point, though, Snyder might want to stop referring to his stadium as being in D.C. Landover, Md. is not Washington D.C., as much as he wishes it would be. Understandably, most non-residents don't know the difference, but still...

Anyway, here's an amused photo of Snyder and Wolfson for your viewing pleasure. 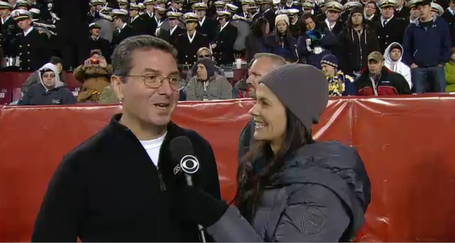