Toledo coach Matt Campbell is coaching his first career game in the 2011 Military Bowl against Air Force because former coach Tim Beckman was hired at Illinois. Campbell, who was the team's offensive coordinator, normally does his work from the press box, and as reported earlier in the week, the plan was for him to do that for this game as well.

So, here's a picture of him coaching his mates from several feet above them. It's as if he's towering over an empire, except the exact opposite. Let's just say he doesn't look like very much of a head coach in this shot. As long as it works, it works, I guess. 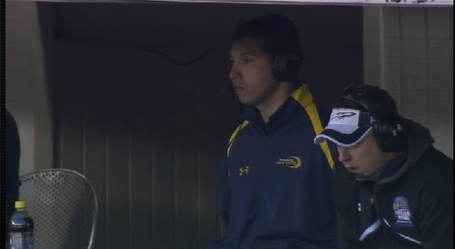