Share All sharing options for: PHOTO: One Sponsor Covers Up Primary Sponsor's Banner At 2011 Military Bowl

The primary sponsor of the 2011 Military Bowl is Northrop Grumman, a global security company that presumably paid good money to have their name on everything related to the bowl game. It makes sense as the sponsor because this is a game involving one of the service academies. One of the secondary sponsors of the game is Geico, which you know as the D.C.-area car insurance company featuring Brian Orakpo as a national pitch man.

Obviously, both sponsors need to be prominently featured in any camera shots, but you'd think there would be a better way to do it than have one banner covering up the other. Well done, guys. 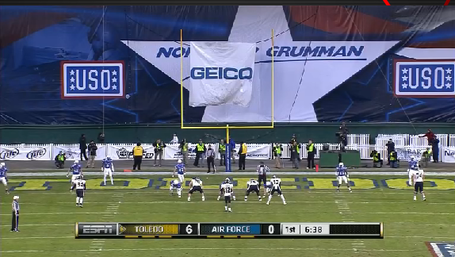