The Washington Wizards have had a tough start to the season, dropping their first three games in less-than-impressive fashion. But apparently losing in a dreary way is not enough for the hometown hoopsters, as Friday evening against the Milwaukee Bucks the Wizards pulled off a rather astonishing feat: having a player (veteran Roger Mason) enter and score in a game he was ineligible to even play in, and then having that player sent to the showers. Confused? Me too, a little bit. I will let Washington Post scribe Michale Lee explain the bizarre situation:

Mason entered a game that he was ineligible to play in, made a jumper, received a technical foul and was sent to the showers for a situation that was beyond his control.

In a nutshell, Wizards coach Flip Saunders OK'd the official active roster given to him by the Bucks prior to the game, failing to realize Mason wasn't even listed on said active roster. Hard to believe, really, given that Mason was indeed active and had played in the first two games on the year (albeit for only eight total minutes). To make matters worse, Mason then entered the game in the first quarter, made a jump shot, and was T'd up by officials during an ensuing timeout because of the roster snafu. Off to the locker room the veteran guard went, baffled by what had occurred. 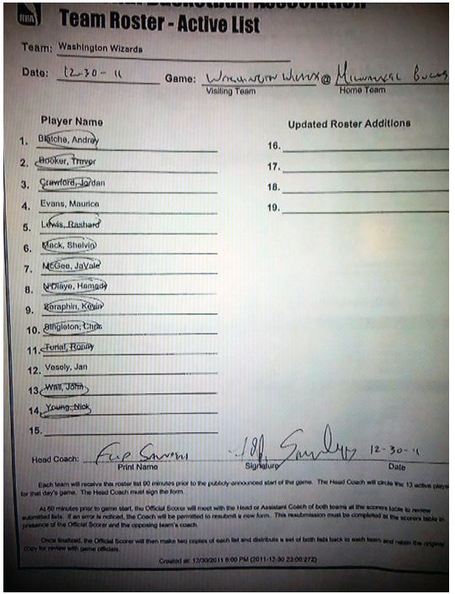 This situation is so disappointing and frustrating even a proper "How u" joke won't make Wizards fans feel any better about the current incarnation of this team. Only 63 games to go, folks.

For more on the Wizards, be sure to check out Bullets Forever. You can also visit the SB Nation basketball hub for more news and notes from around the NBA.