Wednesday night is the fourth edition of Wizards vs. Magic this season, with the teams finishing their season series before the All-Star break. The Wizards have lost the first three meetings between the teams, most recently by a score of 110-92 in Gilbert Arenas' return to Washington.

Tonight it's Rashard Lewis' turn to step back into the building he called home before the teams swapped former All-Stars. Lewis is out tonigt, but he can likely expect a warm welcome nonetheless. As Michael Lee dutifully noted, the Magic didn't exactly purge his likeness from the organization as the Wizards did with Arenas. Here's the evidence: 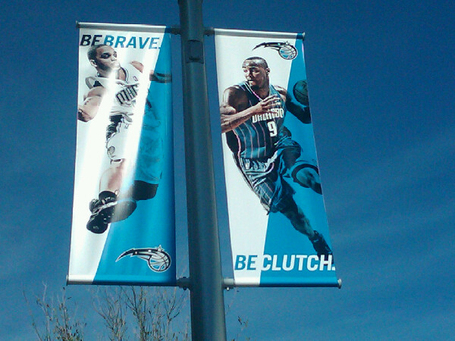 In addition to Rashard Lewis sitting out, Nick Young is doubtful and JaVale McGee has a sore back, which  he of course needs to protect for the Dunk Contest this weekend (info per Lee). Advantage Orlando, as if that wasn't already the case.

Last time out, Dwight Howard torched the Wizards, hitting his first 10 shots en route to 22 points and 15 rebound effort. The Wizards post defense was poor in general, as forward Ryan Anderson tagged Washington for an additional 19 points and eight rebounds.

But this is a new Washington Wizards team, today! This is a team with a road win under its belt!

OK ... it's the same Wizards team. And even if they come out with the same energy and confidence in Orlando that they displayed in Cleveland, it isn't likely to be enough tonight. But then again -- two road wins heading into the break would be a good kick start to the second half of the season. And that would give fans another reason to look forward to the second half of the season.