Richmond upset No. 5 seed Vanderbilt in the second round of the 2011 NCAA Tournament (which is really the first round), and they did it because Kevin Anderson went off. Anderson scored 25 points in the game, including three straight three-pointers that turned a six-point deficit into a three-point lead midway through the second half.

But to me, the best thing Anderson did the whole game was hit an off-balanced runner with 19 seconds left to give Richmond a three-point lead. I don't have video of the shot, and all the random things that happened at the end of the game caused people to forget about it, but it was truly an impossible shot. Let's go over this for a second.

Anderson ran the clock down and started to drive right. It looked like he had gotten around his primary defender and had a clear path to the rim, but then, Vanderbilt's big center Festus Ezeli came over to stop the drive. Keep in mind, this is the same guy who knocked Anderson's teammate's nose out. 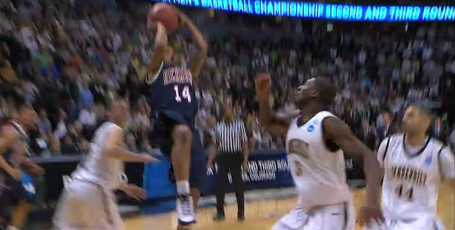 Anderson then had no choice to jump off his left foot and go backwards. The Commodores shut off all his passing lanes, and with the shot clock about to expire, he couldn't just dribble it out. That explains why he jumped off the back foot to get some separation. 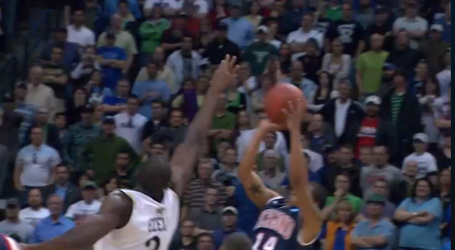 As you can see, it didn't really work. Ezeli is right there to block the shot. Except ... somehow, Anderson lofted the ball over his outstretched arm. 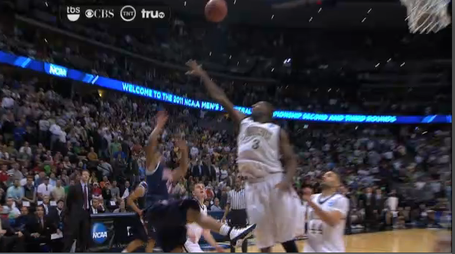 The end result? Nothing but net, and Richmond moved on. We talk about big players making big shots in big spots all the time in sports, but that play fit the description perfectly.