Share All sharing options for: PHOTO: Dan Geriot Elbowed In Face During Richmond Vs. Vanderbilt Game 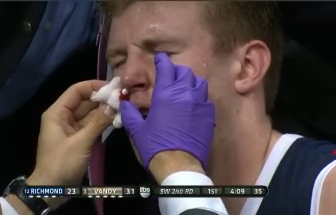 Who says basketball isn't a contact sport? Not Dan Geriot, the Richmond center who absorbed a major blow in the Spiders' 69-66 upset 2011 NCAA Tournament win over No. 5 seed Vanderbilt.

With 4:09 to go in the first half, Geriot was scrambling for a rebound with Vanderbilt center Festus Ezeli when he got clocked in the face by an errant Ezeli elbow. The play wasn't intentional, but it was probably reckless, since Ezeli had inside position. Geriot went down in a heap of blood, and play was stopped for several minutes. Here's how John O'Connor of the the Richmond Times-Dispatch described it.

Dan Geriot sat at the end of the University of Richmond bench holding gauze on his nose, then his lip. The Spiders' center took a first-half elbow from Vanderbilt's 6-foot-11, 255-pound Festus Ezeli that caused Geriot, with assistance, to stagger off the Pepsi Center court, leaving a trail of blood.

The Spiders trailed 31-23 at that point, which means they outscored Vanderbilt by 11 points the rest of the way. Sportswriters could say that was the "turning point" of the game. We'll just say that it was a big blow for Geriot to take. More photos below the jump. 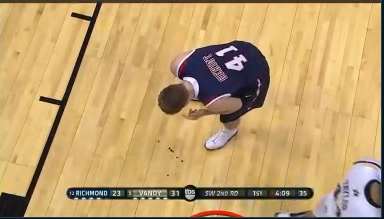 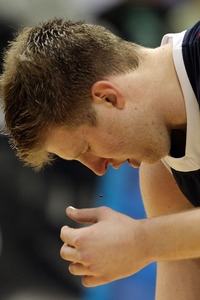 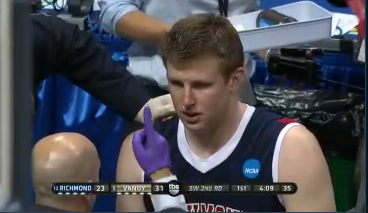 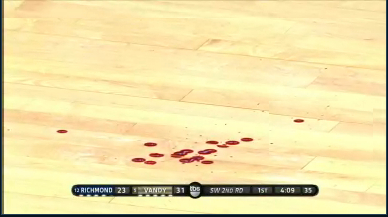 Also, here's a .gif of the play from MockSession.