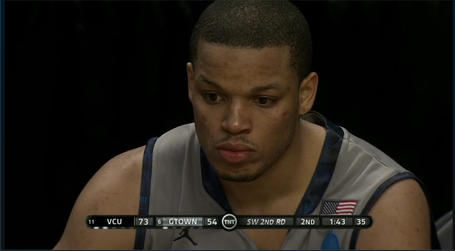 Chris Wright worked his tail off to even get a chance to play in Georgetown's 74-56 NCAA Tournament loss to Virginia Commonwealth. Three weeks to the day after having hand surgery, Wright was back on the court for his team. So you can imagine the pain that the Hoyas' loss inflicted on him.

Actually, you really don't have to imagine it, because you saw it for yourselves. With just over nine minutes to go in the game and the Hoyas down by 19, Wright exploded in anger after the referee apparently missed a call. Wright had cut backdoor, and Nate Lubick tried to find him with a bounce pass, but the ball appeared to go off a VCU player's leg out of bounds. When the referee ruled VCU ball, Wright lost it.

It was a damaging temper tantrum, but it was also an understandable one. If you don't think so, try joining a league you really care about, breaking your own hand, then coming back and risking long-term injury just to see your team get blown out in the game and you be too out of rhythm to do anything about it. If you can manage to avoid losing your cool, you're a better person than I thought.

(GIF below the jump, via @bubbaprog).