VCU Is A Cinderella Sweet 16 Team, But Is Not This Year's George Mason

VCU's surprise run to the Sweet 16 has many evoking memories of another CAA team that made a deep NCAA Tournament run as a No. 11 seed. Here's the thing, though. VCU is different, and maybe even better, than the 2006 George Mason squad.

Share All sharing options for: VCU Is A Cinderella Sweet 16 Team, But Is Not This Year's George Mason

Last Monday, after the ESPN college hoops crew decided to eviscerate the NCAA Tournament Selection Committee for their inclusion of VCU in the Field of 68 (still weird to type), I decided as a CAA fan to become the SB Nation D.C. torchbearer for Shaka Smart's 2011 Rams basketball team. The premise was simple: VCU deserved to be in the field based on their body of work, and any subsequent wins would not be fluke upsets but rather a solid ball club simply winning games.

Well, I need to tap into the Gheorge The Blog  petty cash fund and send Shaka a Harry and David sausage and cheese basket, because that premise looks pretty good in retrospect if I may say so myself. So, last night, in my Dallas hotel room, to prevent a Captain Willard-esque meltdown, I decided to pen another tome to this year's tournament darlings, Virginia Commonwealth University.

Problem was, much like Mr. Maguire, I didn't even know where to start. Is VCU this year's 2006 George Mason, as everyone is droning on and on about? Or, as I slowly realized over a $28 room-service lasagna, is VCU instead ... wait for it ... this year's VCU? 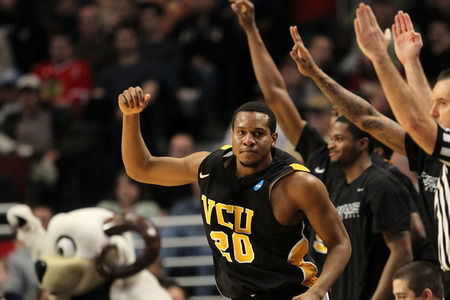 Let me explain. Sure, Shaka Smart's 2011 team has some similarities to Jim Larranaga's 2006 bunch. Both are/were veteran mid-major squads with sneaky athleticism who play as a true team. Mason had five players average double figures during their 2005-2006 season; VCU has four guys averaging double figures this year. Both have personable and energetic coaches. Both played up the David vs. Goliath, Us against the World mentality (though as noted above I never felt VCU was a David ... and there's no way Shaka Smart really did either). Both have become the de-facto "Cinderellas" during their run.

But that's where the similarities end, at least to this observer. While George Mason scrapped and clawed their way to their magical Final Four run, having to stage rallies in each game they played, VCU has won three games in five days against major conference competition in dominating fashion. Just ask USC, Georgetown and Purdue what they think of the Rams. Wait, someone did. Here's Purdue coach Matt Painter after last night's thumping:

"If you watched VCU a certain time in the season you wouldn't see what you just watched out there," Painter said. "Then you watch them during a four- or five-game stretch and you literally think, 'They can beat any team in the country.' ... I made that statement -- VCU can beat any team in the country on a neutral court. And I believe that. ... I was hoping that team wouldn't show up, but that team from VCU did show up."

VCU has won its first three tournament games by an average of 16 points per game behind tenacious, suffocating defense and solid three-point shooting. This should surprise no one, as VCU has excelled all season with a similar formula. But even I was stunned when totaling the numbers for these first three victories: 29 of 60 from behind the arc (48 percent) and 58 forced turnovers against just 18 Rams giveaways.

I would be remiss if I also didn't mention the good this VCU run is doing for the conference as a whole. Rather than pretending to be an expert on win shares and bid shares, I'll let CAA and UNC-Wilmington columnist Brian Mull explain.

VCU win worth another $1.4 million for the #CAA, bringing total to $9.8 million generated through NCAA Tourn...60 percent of this money ($4.2 million) will be split equally between the 12 CAA schools. The other 40 percent goes into an incentive pool (Top 100 RPI or winning non-conference record; NCAA tournament selection; NCAA wins).

VCU is in the Sweet Sixteen for the first time in school history, but don't stop there fellas. Mark it down - Four years from now a Bob Wenzel or a Len Elmore will be toting some mid-major upstart as 2011 VCU. Is that #5Wins4CAA's music that I hear?