VCU Reaches 2011 Final Four Thanks To Dominance, Not Luck

VCU's run to the Final Four has evoked memories of George Mason in 2006 and LSU in 1986, but the truth is that VCU was far more dominant than either of those teams. Relive that dominance blow-by-blow here.

Share All sharing options for: VCU Reaches 2011 Final Four Thanks To Dominance, Not Luck

"Anything is possible."  Those are the words VCU coach Shaka Smart spoke to the Rams faithful in San Antonio last night after his No. 11 seeded Virginia Commonwealth Rams shocked the basketball community by running the heavily favored No. 1 seed Kansas Jayhawks out of the gym, 71-61, to reach the 2011 Final Four.

If you've visited this space in the last few weeks, you know I have a little bit of a thing for Shaka Smart and his fightin' Rams. However, I'm not here to tout VCU's "Cinderella-ness" or even revisit the "should they be in or not" conversation - folks rehashing that argument are probably still churning out 139 word comedic gems about fallen CBS sitcom stars.

My focus today is instead on something I don't think enough folks are talking about, but hopefully will be soon: the sheer dominance with which the Rams have won their NCAA Tournament games. 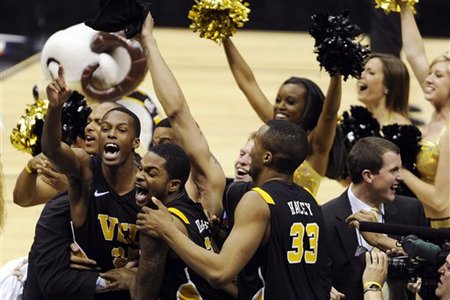 Enough of the comparisons to 2006 George Mason (we've been over this) or even 1986 LSU (an SEC school that won their first two games on their home court). The 2011 VCU Rams are a team on a run we have not seen before from a double-digit seed, beating five ("Five is right out!") major conference teams on their way to the Final Four by an average of 12 points a game. By comparison, George Mason won by six points per game, while LSU won by four points per game. VCU's frenetic defensive pressure and deadly three-point shooting have carried them in games. Let's recap its dominance, in visual (hopefully) form.

After an ugly first half, VCU dominated the second half, holding the Trojans without a field goal in the game's final nine minutes. Think Bugs Bunny dueling Yosemite Sam, letting Sam pace off his steps and turning around to a brick-filled glove from Bugs in the mug. I kind of like Joey Rodriguez (eight points, five assists, two made threes) in that mischievous Bugs role, now that I mention it.

Think demise of Naked Gun's Vincent Ludwick here. VCU ran circles around the Hoyas in Chris Wright's return, making 12 of 25 from downtown, with Brandon Rozzell driving the steamroller by hitting six of his 10 threes. The Hoyas couldn't handle the Rams' "Havoc" defense, committing 17 turnovers and making just 39 percent of their shots. As an aside, Shaka Smart calling his defense 'Havoc" now bumps the "Anne Hathaway gets nude" film of the same name one notch down as my favorite "havoc" of all time.

I struggled to really capture how bad this went for the Boilermakers, or, should I say, how thoroughly dominant VCU was in this game. Purdue's season basically ended like Chicago Flight 209, crashing through gate after gate upon "landing" as its fans looked on in horror. The fun Rams stats from this one: 57 percent shooting from the field, 26 assists on 37 made field goals. Pretty sure Matt Painter felt like Steve McCroskey after that game.

Sweet 16 opponent: Florida State from the ACC (72-71 winner in overtime)

This was obviously the tightest of the battles, but VCU still managed to squeak out the win behind gritty defense and long range marksmanship (is that a broken record I hear?). The Rams were 12 of 26 for the game from three-point range, forced 16 turnovers and had 12 steals. Since Shaka Smart set me up so nicely with this one, this was kind of like the snowball fight in Dumb and Dumber. That final Rodriguez-to-Bradford Burgess pass and layup with seven seconds to play is the classic Jeff Daniels snowfastball to the face of Lauren Holly.

Here's the doozy. If you listened or read anything about this Jayhawks/Rams match-up leading into the game, you were told VCU had not shot. What they heck were they even doing in this competition, fans and viewers alike seemed to ask?

If you think about it, VCU was the Ben Richards of this tournament. Yep, you see where I'm going with this. Forget "The Running Man;" we're talking about "The Running Rams" here. To extend the analogy to Channeling Ahnald and his 80s sci-fi action classic, VCU had defeated the likes of Subzero, Dynamo, Buzzsaw and Fireball ... and then here comes Kansas, the tournament's savior to stop the upstart Rams. In this case of course Bill Self's squad is obviously Captain Freedom (yet another governor in this movie).

And ... yup, you know how the Running Rams handled this: 12 of 25 from three-point range while holding the Jayhawks to two of 21, 14 assists on 21 VCU made baskets, etc. You can also throw in the little gift Kansas provided by shooting 54 percent from the free-throw line. VCU had an 18 point lead in the first half, and withstood the inevitable second half charge by the Jayhawks with the grit and gusto we have come to expect from Shaka's squad.

(Before I go, if you want to hang with this forced analogy a tad longer, you could easily see Jay Bilas and Dick Vitale editing the "Butcher of Bakersfield" clip and running it on Selection Sunday when discussing VCU's inclusion). 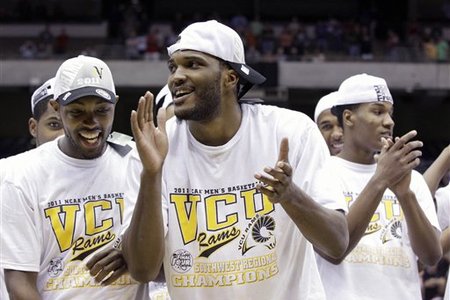 What does all this mean entering the Final Four? A whole lot of nothing to be honest, except the fact that VCU's dominant run should open some eyes and make folks realize any of these four teams in Houston can be crowned 2011 NCAA Tourmant Champion come next Monday. In this humble writers' opinion, the Virginia Commonwealth Rams have shown time and time again that they have as good of a chance of any Final Four team to be that champion.