VCU's surprising run to the 2011 FInal Four has earned them a lot of new fans, and seemingly more marketing opportunities int he way of t-shirts. First it was the "There Go My Brackets" shirts (thanks again for that). But now, the ante has been raised. Tweeted by @KburkeDC, via @DCsportsbog. 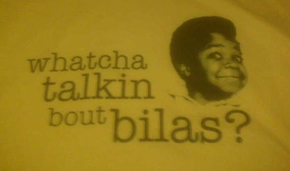 First of all, anything with Gary Coleman on it, especially making that face, is going to sell. But when you add in this delightful bit of wordplay, you got yourself a perfect storm of smarmy deliciousness.

If you watched Diff'rent Strokes like me, then you will remember that the face on the t-shirt is not the face that Arnold used to make when delivering his iconic catch phrase. The original was much more skeptical and inquisitive. But that's what I think makes this shirt so good. This is exactly what I think VCU players and fans would look like if they got the chance to ask Jay Bilas this question.While Arnold was skeptical about Willis was saying, VCU fans are happy to prove Jay Bilas wrong. It's perfect.