The NHL playoffs are upon us, and for the second year in a row the Washington Capitals are the first seeded team in the Eastern.

But man, it was a much different road to this year's top seed than last year's. Last year the Caps outscored the world during the regular season, cruising to hockey's best regular season record.

This year? Not so much. They had to grind it out and play more of a defensive minded style of play in order to get things done. It wasn't always pretty, but they got hot at the end of the season and earned that top seed.

In fact, according to Japers Rink, we may have just witnessed the best defensive performance in franchise history. 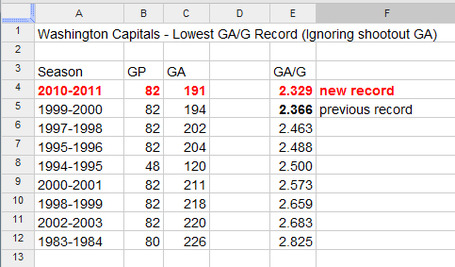 What's interesting is that not only is this years performance in this statistic the best ever for the franchise, but that none the three prior playoff teams aren't even in the top nine. That goes to show you the real mentality change this team has seemed to embrace this year.

The Caps went through their fair share of aches and pains trying to adjust to the new defensive mindset, but it seems to have served them well in the latter half of the season.

Hopefully that mindset will also serve them well in this year's playoffs, too.