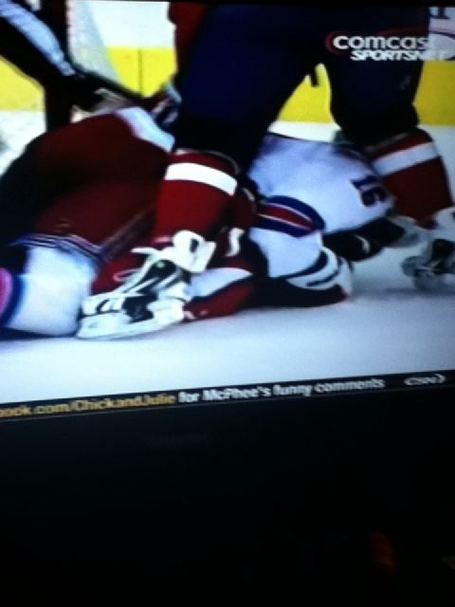 Let's just say Sean Avery isn't the most well liked individual inside the DMV right now. This came from his antics during last night's playoff game against the Caps in which he would pester and pester and pester, but the Caps refused to give in and were never rattled by his act.

More after the jump.

He began by trying to take down Brooks Laich near the Capitals bench, with this lovely shot (which then resulted in the above image): 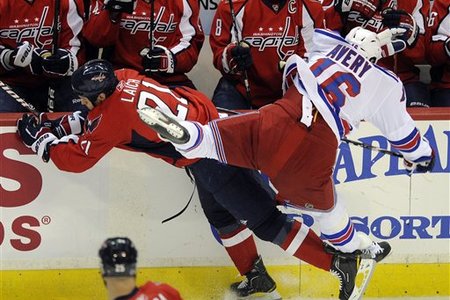 He then tried pulling one of these, several times, in front of the Caps net: 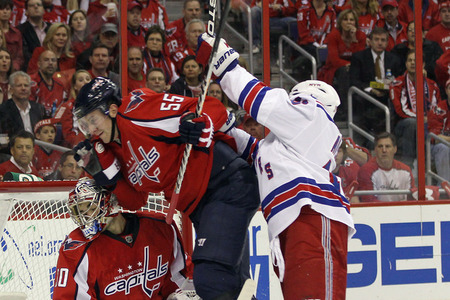 What a swell guy. Fortunately, the Caps were smart enough not to entertain Avery and aid him in his effort to try and get in their heads.

At certain points in the game he [Avery] tried drawing a penalty against John Carlson, Jason Chimera, Jason Arnott and John Erskine.

"It's the most important thing," the veteran Arnott said after the game. "You've got to turn the cheek and keep playing hard and focus in on the big thing, and that's winning."

"That's how he plays," Boudreau said. "I thought we did a really good job of staying out of it. It's not like he's a first-year guy in the league any more, and it's something we all know about."

After last night, it's safe to consider the Caps the victors in Avery's futile head games. But most importantly, they were the victors against the entire Ranger team, and now head to New York with a 2-0 series advantage.