It's pretty clear that in his short stay here, Jason Arnott has had quite the impact. In fact, it's no coincidence that the Capitals late season surge coincided with the acquisition of the veteran center from the New Jersey Devils.

But check this statistic out, as told by Mike Vogel:

#Caps are 12-0-1 with Jason Arnott in their lineup, and he has been Mr. Clutch in many of those games

Wow. How about that.

Vogel also goes in detail on his blog about how Arnott has come through in nearly every game he's played in since he's been a Washington Capital. Whether it be a key assist here, or a clutch goal there, Arnott has certainly become a late season hero for this team.

Last night was no different, as Arnott scored the second goal of the night to put the Caps ahead 2-0 on a power play, their first PP goal in their last five playoff games.

Then he did the Arnott roar: 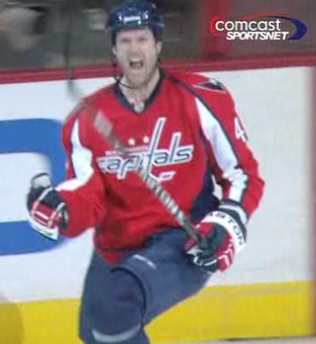