VIDEO: Brandon Dubinsky Goal To Give Rangers 3-2 Win Over Capitals

Share All sharing options for: VIDEO: Brandon Dubinsky Goal To Give Rangers 3-2 Win Over Capitals

Here's the video of Brandon Dubinsky's game winning goal late in the third period to give the Rangers a 3-2 win over the Capitals in Game 3 of their 2011 NHL Playoffs first-round series. As you can see, the puck seems to deflect off of Alex Ovechkin's stick. At that point, Michal Neuvirth couldn't find the puck, which is how it managed to get around him for the go ahead score.

It seemed to carrum in a way that confused him, as he was looking around for the puck briefly before he realized it was already passed him. Tough break for him.

What's interesting is that this goal happened during a 4 on 4, which was because John Carlson and Brian Boyle were called for roughing. We would be able to show you that video, but NBC didn't show the roughing at all. So once NBC came back from the commercial break, the 4 on 4 graphic appeared, and the Dubinsky goal shortly thereafter.

But back to the goal itself. Check this image out: 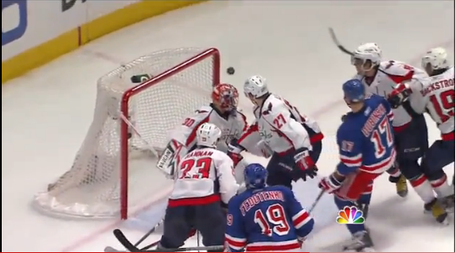 If you look, you can see the puck to the left of Neuvirth, at which point he is powerless to stop it from going in.

A very tough goal, in a very tough game, in what may now be a much tougher series for the Caps.