Throughout the NCAA Tournament, thanks to the CBS cameras, we have been able to see a lot of the pregame locker room speeches, as well as the post game celebrations of the winning teams. Each team has their moments, like when Brad Stevens body bumps one of his players before having he and his whole team sing the school's fight song.

But VCU's victory celebrations during its run to the 2011 Final Four are particularly rhythmic, as the entire team seems to be filled with dancers. Probably the most intriguing of which has been redshirt freshman Heath Houston's dance. Steps and explanation after the jump.

Houston's victory "celebration" has been a staple of the team's Final Four run. After seeing it a few times, this dance apparently has some pretty distinct steps. Here's a look:

Step 1: Everyone in the room starts saying "Hey" in a rhythmic manner in order to hype Houston up. Then comes the interesting part. 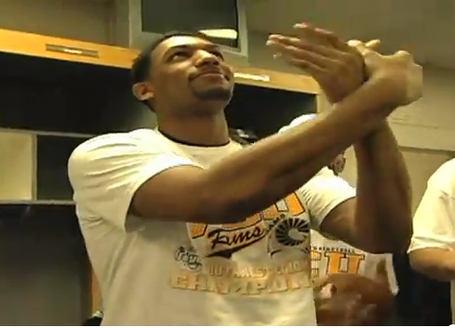 Step 2: He uses his hands as props, mimicking some kind of bird (or insect) flying into the air. But he's not done yet with that flying creature. 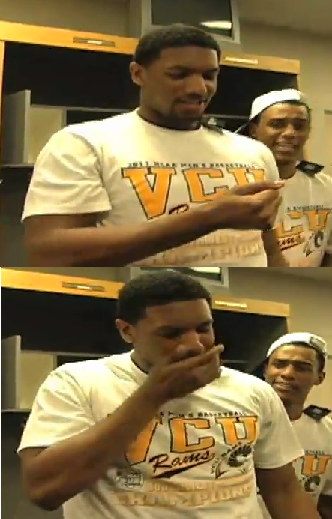 Step 3: He catches said bird out of the sky, and then apparently eats the thing. From there, that's when the actual dance begins (at the 3:29 mark)....

It appears to be a mix of the dougie mixed with Mr. Miyagi's "Wax on-wax off" maneuver mixed in with bobbing and weaving from boxing. There are some celebration dances out there, and I know a pretty good amount of them, but I honestly have no idea what this one is.

And according to the Richmond Times Dispatch, some of the VCU players still aren't entirely sure what it is:

As for what the dance is, senior Brandon Rozzell struggled to put his finger on it.

"I think it's Tae Bo," he said. "I think he watched his father do Tae Bo or something, and he brought it over."

Here's hoping for some more "Tae Bo" in the locker room after tonight's game against Butler.