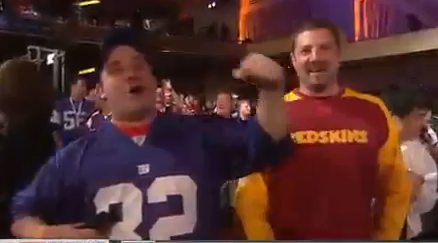 We're just underway at the 2011 NFL Draft, and already, one thing that was long suspected happened. Commissioner Roger Goodell took the podium 30 minutes before the beginning of the draft to introduce the 25 players in attendance, and he was quickly serenaded with chants of "We Want Football!" Obviously, with the NFL lockout still possibly in effect, the chants were poignant.

Goodell responded with a thumbs up and by agreeing with the fans. But the most significant part of the whole thing for me was seeing this photo above. Yup, that's a Redskins fan and a Giants fan standing together in solidarity chanting together about how they want football to actually happen. A cynic would, well, be cynical about this. Me? I kind of love the image of one thing transcending team rivalries.

Ultimately, we as a nation are clearly obsessed with football. Enough so that rival fans will come together to fight for it to happen. Video below the jump, via SBNation.com.