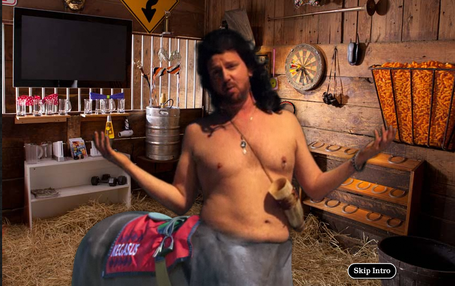 Ladies and gentlemen, I bring you essential information and an inside scoop on who might win the 2011 Preakness Stakes. Kegasus, who is the OFFICIAL mascot/centaur/drinking enabler of the Preakness, is calling a victory for Animal Kingdom on Saturday.

HAHA. Get it! "Half-horse's mouth!" Nice one, USA Today. Round of applause. Anyway, a couple other Kegasus-related items, since I find the whole idea hilarious.

1.  Here's Kegasus explaining his role to the press the other day, from the same article.

"Legendariness includes being conscious, remembering what one has done, and exercising what each and every human being and animal is instilled with, which is common sense," Kegasus said Monday when he met the press on the grassy infield at Pimlico.

So basically, the animal that is encouraging people to come and drink is also advocating they stay conscious and have common sense. Got it.

2.  The New York Times has a long article summing up why Kegasus is such a divisive figure, if it was, in fact, real. For some reason, this quote cracked me up.

"No matter how you paint it, the Preakness is a party no matter where you are sitting," Mike Martin, the agency's creative director, said. "If you're in the grandstand, you're wearing a big hat and sipping a black-eyed Susan cocktail. The infield crowd eats funnel cakes and drinks beer. We were trying to create something for everyone."

I mean, he's right, but I'm not sure I'd phrase it that way. That sounds like something someone would say after downing a few cold ones.

3.  The Washington Post is holding an online chat with Kegasus tomorrow. Sorry we couldn't provide you all with the same.