I'm no Ansel Adams, but I did feel the need to snap this pic of Rory McIlroy's records SO FAR at the 2011 U.S. Open. McIlroy has set six records through three rounds, and is tied for a seventh. In picture form: 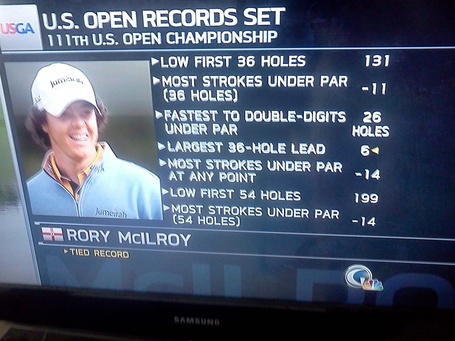 In case that was bit tough to read, Rory's record romp through Congressional:

- Fastest to double-digits under par: 26 holes

Just think, that's seven records broken or tied through three rounds of the Open. Just imagine if McIlroy plays close to that level again on Sunday. Tiger who?

For a full scoreboard, click here. For more on the 2011 U.S. Open, visit Waggle Room.