Rory McIlroy U.S. Open will be remembered as one of the greatest major performances in golf history. Watching it was surreal.

Rory McIlroy was tapping in a six-inch putt to the win the 2011 U.S. Open, and I looked up from shoveling lasagna into my mouth just in time to catch it. I got an sinking feeling in my stomach: Crap, is it *really* over?

Rory McIlroy's U.S. Open was so dominant it almost softened the moment. The staggering gap on the leaderboard between first place and the field was so large that it clouded how real this was, how historically low McIlroy was shooting. Rory is doing what?

And so it went Sunday, McIlroy playing the only golf that mattered. How low could he go? Or -- wait a minute -- are we completely sure he's been on the same course all this time?

When he birdied two of the first foul holes, McIlroy turned Sunday into a seemingly eternal victory lap. He marched along, content to leave short puts for par and the media with all day long to compare him to all-time greats, ogle his swing, and celebrate his humility and charm.

There was little drama. So I didn't expect to feel that momentary emptiness when the tournament ended. I'd been waiting for the official ending all day. McIlroy wrapped it up on the first four holes Sunday, remember?

I guess I didn't want it to end. Look at what McIlroy did:

In place of the drama from a tight race, the U.S. Open was about the spectacle, marinating in McIlroy's performance. He delivered history, but it was surreal the way it stood all alone.

A quick Google search will deliver plenty of columns outlining why this was so great for Rory. Why Rory is so great for golf, and for the fans. It's terrific, no doubt. Go read Sally Jenkins (Washington Post) and Christine Brennan (USA Today), who wrote terrific columns on golf's new golden boy. (The Anti-Tiger? Sure, why not ...)

But the real treat of the weekend was the golf. McIlroy littering the fairway's at Congressional with his drives, saving himself when he didn't (only four holes over par the whole event!), and nearly acing the 10th hole on Sunday.

Sunday seemed to last forever. Then it was done all too soon. 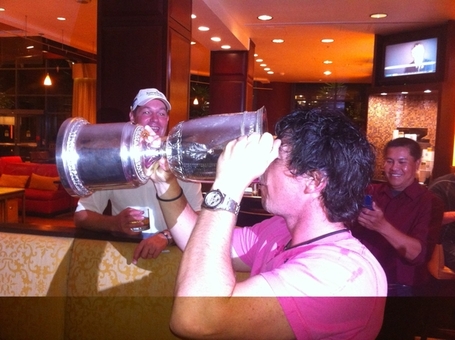