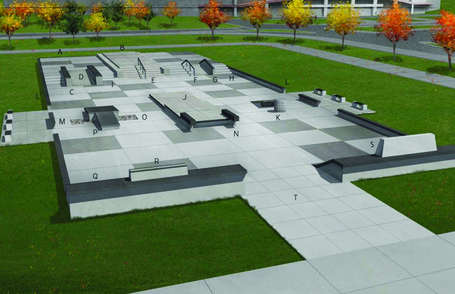 The picture you see above is a model for a new skatepark called Maloof Cup Park that will be built on the RFK Stadium Festival Grounds. It's being built via a partnership between Maloof Skateboarding and Events D.C., and it is scheduled to be completed by the end of the summer. This is just in time for the new annual Maloof Money Cup from September 3-4, which will bring in the world's best skateboarders for one of the biggest skateboarding events on tour.

In case you were wondering, yes, these are the same Maloofs that currently own the NBA's Sacramento Kings and nearly moved the team to Anaheim last year. So, yeah...

The new park is 15,000 square feet, and the plan is to have it be available for recreational use for the rest of the year. Events D.C. will also try to bring in more events to the park, which is apparently the first big skate park in the city.

For more information on the Maloof Money Cup, here's its website. Why D.C. needs a skatepark is beyond me, but I'm not exactly embedded in that culture either, so maybe I'm wrong.