We've been talking all morning about the fracas that the Georgetown basketball team got into with a professional team in China during an exhibition match. But there is no video as of yet, so it is pretty hard to know exactly how crazy it got. Well, according to this picture, pretty ****ing crazy. Via Sinna.com and DC Sports Bog. 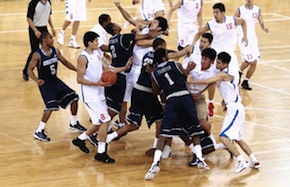 Let's go left to right on this one.

UPDATE: Here is another picture of Jason Clark being stomped on by a number of players from the Chinese team, tweeted by Dan Steinberg. 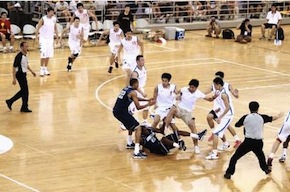 -Georrgetown player approaching the pile with his fist clenched, ready to roll, son.

-Bayi player not quite sure what to do with the ball. Just put it down and throw some 'bows.

-Two very tall players that appear to have punched right past one another. This is really closer to a hug than anything else.

-Up top you can see the rest of the Chinese team running in to join the melee.

-Two separate shoving matches, including one that features what has to be an assistant coach or trainer for the Chinese team. He's wearing a collared shirt and khakis for God's sake.

And this is BEFORE chairs and bottles started being thrown. I'm waiting for some video to emerge of this before I try to figure out exactly what happened. But the one thing I do know, this is the craziest exhibition game I have ever seen.