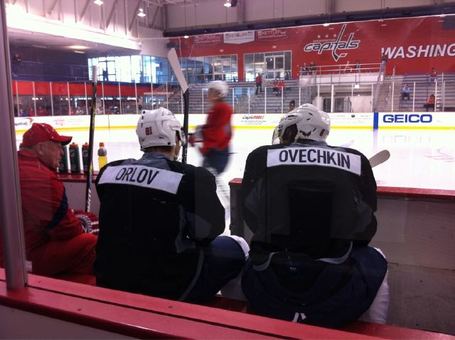 BALLSTON, Va. - The 2011-12 NHL season is unofficially underway as the Washington Capitals opened their Rookie Camp Sunday morning at Kettler Capitals Iceplex. The roster is made up of prospects hopeful to make an impression and earn a spot on one of the Caps' minor league affiliates or an invitation to veteran training camp, which begins next Saturday. Yet, there was definitely one player on the ice Sunday that did not fit the above description (either that or he is the most expensive rookie of all time). The player in question was Caps captain Alex Ovechkin.

Ovechkin skated for about 30 minutes and performed warm-up drills with the rookies. According to head coach Bruce Boudreau, Ovechkin asked him to participate this morning.

"Yeah, he asked me before practice," Boudreau said. "He was in New York [for the NHL's Player Media Tour], you know, and he hadn't been on the ice for the last two or three days. He wanted to get a little bit of skating in. He wanted to stay out more, but I said no."

During last Tuesday's Bauer press conference, Capitals majority owner Ted Leonsis said that Ovechkin wants to become more of a leader by example. Taking the time to skate with young players like he did Sunday is a step in the right direction.