If you live in the Mid Atlantic, you might feel like it's time to start putting an ark together. It has been raining for just about a week now, and it isn't going to stop until the weekend was over. Who knew the sky could even hold this much water? There have been some serious flooding issues all over the area, and the sports arenas that our local teams call home are no exception. Look at this picture of Metro Bank Park, the home of the Nationals AA affiliate in Harrisburg, PA. 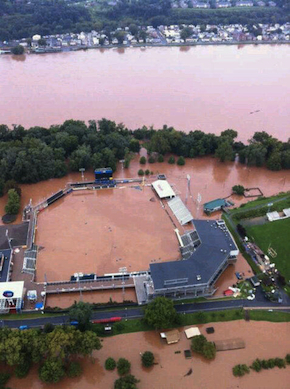 This shot was taken by Tony Wagner and tweeted by Senators third baseman Tim Pahuta. Pretty scary stuff. More after the jump.

Redskins park in Ashburn also got the worst of it from this storm, although not nearly as bad as the Harrisburg Stadium did. You can see the photos at the Redskins blog, but I think it's safe to say that there won't be very much outdoor practicing going on there. The scariest thing is that there are tons of places that look like this all over the area that aren't getting this kind of attention because they don't house professional sports teams. Here's hoping that the rain stops soon, and everyone gets through the next few days safely.