Washington Capitals forward Alex Ovechkin is a renaissance man. He plays hockey, he stars in commercials, he sings. Now, Ovechkin can list another talent on what is becoming a long list: rapping.

Most Caps fans will not understand a word that this Russian group - Sasha Belyi, to be exact - is saying, but dancing is a universal language. Alex Ovechkin, however, does not speak that language well. He seems to have some semblance of rhythm, but his attempts at coming off hard just involves a lot of awkward bopping and arm swinging.

At 2:55, Ovechkin makes his rapping debut, which surprisingly, goes much better than his dancing. Practicing with Eastern Motors definitely helped.

VIa Alex Ovetjkin, here is Ovechkin's introduction and part of his rap translated into English:

"Dynamo's alumni, the eight on my back, I am the all-stars attraction, the stands are jampacked."

Overall, Ovechkin at least earns some sort of street cred, right? If not, at least he provided us with a picture that will entertain us for years to come: 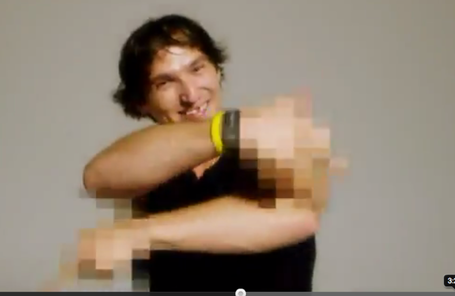