The Washington Wizards are looking for their first win of the season in Boston on Monday night. It's been a frustrating opening week for Flip Saunders and the Wizards, and Saunders boiled over less than two minutes into the game against the Celtics. He was ejected after a badly missed no-call on a block by Boston center Greg Stiemsma, who followed through and barreled into Rashard Lewis after the block. Lewis went down and Stiemsma fell right on top of him in front of Washington's bench.

Saunders was immediately t'ed up and then run from the game by Eli Roe. Flip then went out onto the middle of the floor to plead his case, with Andray Blatche playing the unlikely mediator and holding him back.

Video of the ejection via @Jose3030 and photos of Blatche holding back Saunders after the jump:

In a role reversal, Andray Blatche, of all people, was the one to try and cool down his head coach. 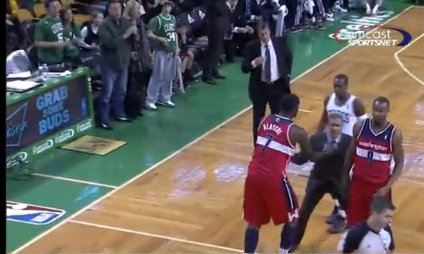 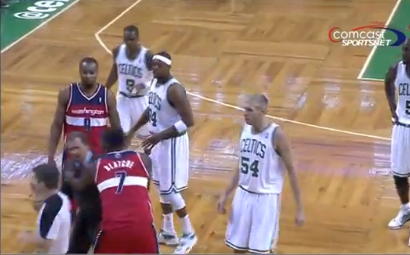 For more on the Wizards, please visit Bullets Forever, SB Nation's Wizards blog. For the perspective from the other side, please visit SB Nation Boston and CelticsBlog.

Wizards Vs. Celtics: Washington Remains Winless As Boston Pulls Away In Fourth Quarter