WIll Alex Ovechkin Receive Suspension For Hit On Zbynek Michalek?

Share All sharing options for: WIll Alex Ovechkin Receive Suspension For Hit On Zbynek Michalek?

During the second period of Sunday's game between the Washington Capitals and Pittsburgh Penguins, Alex Ovechkin leveled Zbynek Michalek along the boards. No penalty was called on the play, but was the hit worthy of a fine or suspension from the NHL? Take a look after the jump.

Replays showed that Ovechkin left his feet before making contact with Michalek, which is a suspendable offense.

Also, Ovechkin's shoulder makes contact with Michalek's head. While the head may not have been the principal point of contact, such hits have been the primary target of the NHL this season as the league looks to limit head injuries. 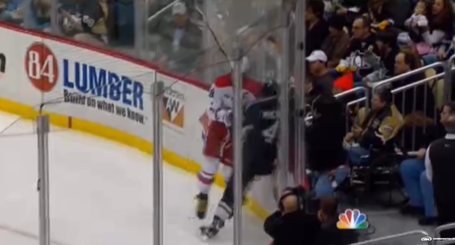 Ovechkin has been suspended twice, with both coming during the 2009-10 season. Yet, he is not a repeat offender as Russian Machine Never Breaks' Peter Hassett points out:

Regardless, Ovechkin does have a prior history, which could factor into the league's possible discussion. TSN's Bob McKenzie provided his insight on Twitter Sunday:

I would be shocked if Ovechkin hit on Michalek doesn't lead to supplementary discipline. Left his feet. Hit the head. Repeat offender.

BTW, it has been more than 18 months since Ovechkin's last suspension, so he would lose "days" pay, not "games," for suspension.

But any player who has suspension "history" (no statute of limitations), that can play into decision whether to pursue on borderline calls.

On the other hand, as said before, no penalty was called on the play. Michalek was also not injured and continued to play after the hit. This should make for an interesting decision/indecision from the NHL.