Share All sharing options for: Amir Khan Still Thinks Loss To Lamont Peterson Was A Conspiracy

You may remember Amir Khan going off on the officiating following his controversial loss to D.C.'s own Lamont Peterson in the light welterweight championship fight in December. At the time, Khan said that the controversial finish was the reason why D.C. hasn't had high-profile boxing in 18 years. We could have shrugged off the comments as frustration in the heat of the moment ...

... Except, Khan hasn't backed down. Nearly a month after the fight happened, Khan went on an epic Twitter rant to say the fight was fixed. He also said Peterson doesn't want a rematch, which I suppose is the newsworthy part of his rant. But let's set that aside for now and focus on the rant. 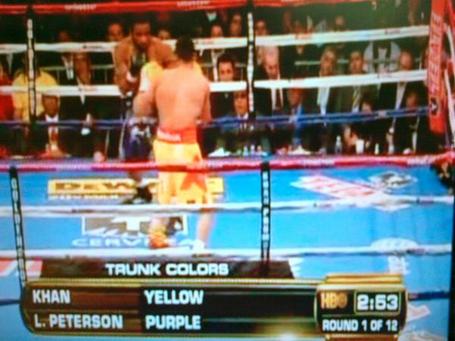 "Ther [sic.] is a guy wearing a grey suit with a blue shirt wearing a hat," Khan tweeted, referring to the man sitting third to the end in the front row on the right. In a series of subsequent tweets, Khan tries to demonstrate that the man interfered with the judges, beginning in the sixth round. Here's a shot of it that perhaps provides the strongest "evidence." Khan later claimed that Michael Walsh, one of the judges who is standing next to the guy, had a score sheet that didn't match the others.

I've read in some articles and people have also told me that after the fight Michael Walsh the guy in the red tie apparently said his score cards didn't match up to the others, it wasn't fair and he looked really scared and he was told to butt out and there was nothing he could do.. Since then no one has heard from him

Peterson has yet to respond to Khan's claims.

Here's the thing that Khan has to remember, though: when you make the rare decision to fight a challenger on his home turf, you run the risk of weird things like this happening. Not to defend cheating, if it happened, but in the world of boxing, you'd be naive to think Peterson didn't have some sort of home-field advantage.