Because the Nationals lost Game 5 of the National League Division Series to the St. Louis Cardinals on a Friday night, the loss has taken a little longer to be chewed up and discarded by the national media, which apparently took most of the weekend off to watch football. So, on this Monday, we see articles like this from Grantland's Bill Barnwell, and tweets like this from Mike Wise.

We will start with Nationals. As great asRGIII's run was, Game 5 is still on everybody's mind. Time to process a little bit @1067thefandc.

Joe Posnanski, at least, had the decency to get his thoughts out on Saturday morning.

Commerce never sleeps, of course, which is why Nationals fans woke up Saturday morning to emails from MLB hawking World Series tickets. The lucky ones who would have gone to at least the first two games of the NLCS (Game 1 would have been Sunday, Game 2 Monday) were left with tickets to nowhere.

At least they looked snazzy. 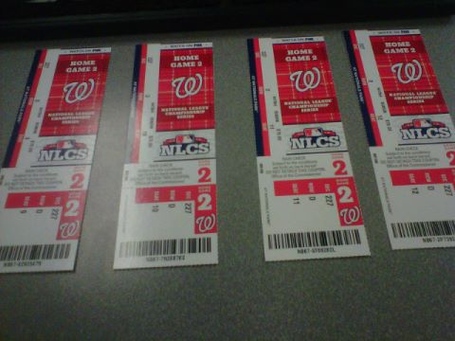