The Terps play the Wildcats November 9 at the Barclays Center in Brooklyn.

Share All sharing options for: Photo: Maryland to honor Brooklyn Dodgers with uniforms for Kentucky game

Hey, look, everyone, Maryland's playing a national power in a marquee game to open the college basketball season! You know what that means? That's right, new uniforms!

The university released photos of the uniforms for Maryland's November 9 game at the Barclays Center against Kentucky Wednesday. They're ... something. 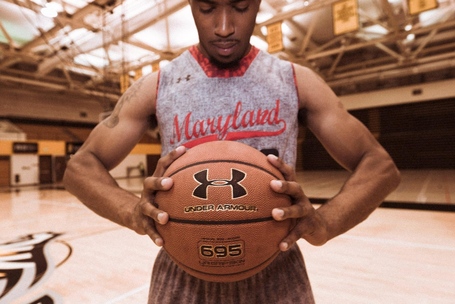 Our friends over at Testudo Times have the explanation.

Maryland's playing Kentucky in the Barclays Center in Brooklyn, so these are an homage to the Brooklyn Dodgers - hence the faux-wool, off-center number, and goofy script ... UA's been making a big push in NYC for basketball (one of the primary regions it's looked to infiltrate, along with Milwaukee and Baltimore and a few others) - a bunch of the public powerhouses are UA-sponsored, so they're building up recognition and brand loyalty. This, an obvious shout-out to BK, is meant to reinforce that, I guess.

Ok, then. For our part, we'll just hope that the Terps can give the defending national champions a game four Fridays from now.