The runners honoring our troops will run from the Arlington National Cemetary, past the Lincoln Memorial, to the U.S. Capitol and back again for the 2012 Marine Corps Marathon Sunday.

The 2012 Marine Corps Marathon will debark Sunday morning — weather permitting, of course, what with Hurricane Sandy a.k.a. Frankenstorm in the forecast — from Arlington National Cemetery in Northern Virginia, and wind its way around many significant points in Northwest DC before going back across the Potomac River and finishing at the Marine Corps Memorial. 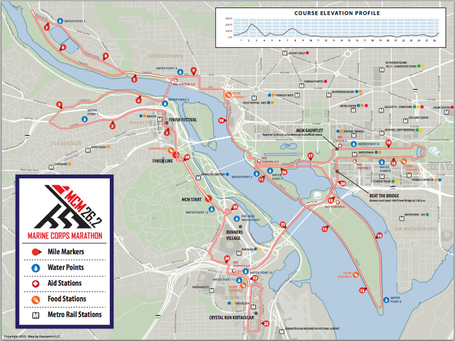 The race will first go through Arlington, where it gets pretty hilly on Lee Highway, go across the Key Bridge and into Georgetown. It'll then go down M Street before going past the Kennedy Center, behind the Lincoln Memorial and around Hains Point. Once the runners turn the corner—where they'll be approximately halfway—they'll go by the Jefferson Memorial and the Tidal Basin, run by the Martin Luther King Jr. Memorial before heading up to the National Mall.

They'll go by the Washington Monument, and run up to the reflecting pool in front of the U.S. Capitol. They'll turn back there, run by the Smithsonian Castle, go back around the Tidal Basin and go over the I-66 bridge toward Crystal City, where they'll make a big loop before coming back up to Arlington National Cemetary for the finish line at the Marine Corps Memorial. It's 26.2 miles in all, and is among the most scenic marathons in the country.