Teddy wins, and there was ... some rejoicing

Share All sharing options for: Teddy wins, and there was ... some rejoicing

In the middle of the fourth inning of Wednesday's Nationals/Phillies game, a large-headed representation of Theodore Roosevelt, formerly the 26th President of the United States, hero of San Juan Hill, patron of the National Park Service, savior of American Football, founder of the Bull Moose Party, and champion of the strenuous life, defeated similarly large-headed representations of George Washington, Thomas Jefferson, and Abraham Lincoln, to win the President's Race for the first time in that competition's semi-illustrious history.

Congratulations immediately poured in from the great and the good.

Even the normally hard-working Redskins media corps stopped what they were doing to witness the historic event. The scene resembled the landing of Apollo 11 on the moon, or at least it would have resembled it if the moon landing was streaming live on Rich Tandler's computer.

Cheers to Rich Campbell of the Washington Times for the video.

Our long National nightmare is over and the healing can begin. 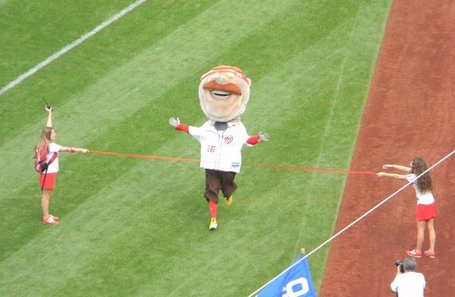