Trailing Game 2 of the NLDS 8-3 to the St. Louis Cardinals, the Washington Nationals staged a rally in the top of the seventh inning. Jayson Werth led off with a single, and Bryce Harper followed with a double. That brought up Ryan Zimmerman, who had a chance to cut the gap to 8-3. Instead he lifted a sacrifice fly to left field. Werth scored easily. Bryce Harper did a very silly thing.

Seeing Matt Holliday's throw bounce on the outfield grass, Harper tried to advance to third and was thrown out by several yards. Why he did this, we don't know.

Look at the photo below. 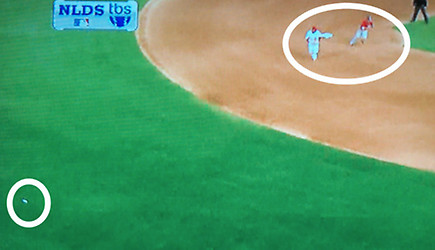 There's no excuse for making an out at third, especially when most non-catchers are able to score on your average solid single. Harper's gaffe cost the Nationals their last, best chance of making Game 2 competitive, and it came on a play that most Little Leaguers would know better than to attempt.

The playoffs come with a higher level of expectation and scrutiny. And we're running out of time to use the "he's 19 years old" excuse with Harper (not least because he turns 20 a week from Tuesday.