Photo: Bryce Harper dresses up as clown for Halloween, frightens us all

Share All sharing options for: Photo: Bryce Harper dresses up as clown for Halloween, frightens us all

You may have noticed a distinct lack of Halloween festivities around these parts Wednesday. The truth is, we've never been that into Halloween, since our hometown mandated that Trick-or-Treating take place not on Halloween itself, but rather on the last Sunday in October, during the afternoon (presumably for reasons of avoiding liability). No, we're not making that up.

So, by the time we were eight, we found it much easier to just mooch off the candy our mother kept out and watch football all day. We are nothing if not practical.

Anyway, D.C. athletes apparently didn't grow up in the same joy-depriving state that we did, so they were free to let their freak flag out. Especially Bryce Harper, who tweeted the picture below of him dressed as a clown (natch). A horrifying, seemingly-pantsless, Richard Simmons-aspirant clown.

Come on kids! Get some candy! #Halloween twitter.com/Bharper3407/st… 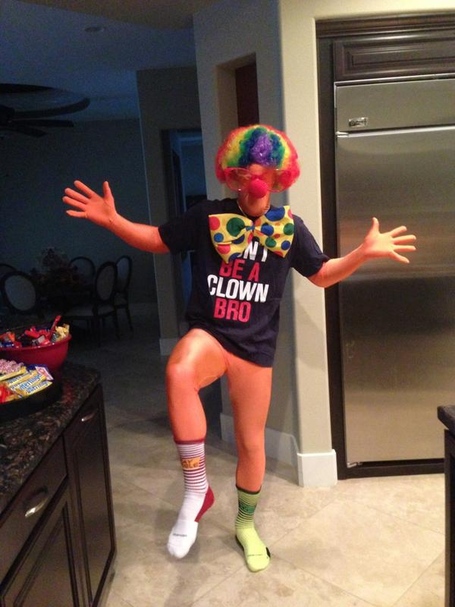