The Redskins coach has some fun with Chick Hernandez of CSN Washington.

So, it's not been the greatest week for Mike Shanahan. His football team is 3-6, and now the entire world knows that his money and passport were stolen from a briefcase at Heinz Field in Pittsburgh a couple of weeks ago.

But to his credit, Shanahan can at least let his guard down a little bit, like prior to Thursday's press conference when he borrowed the porkpie hat worn by Chick Hernandez of CSN Washington. 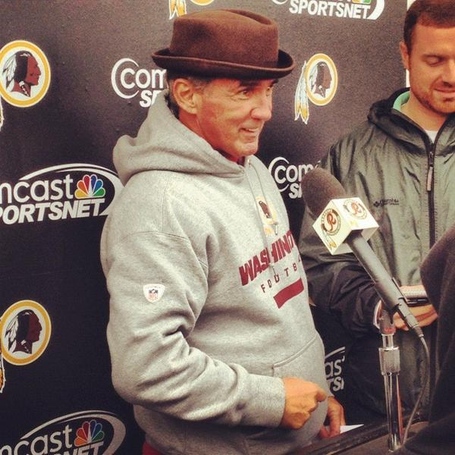 Not a bad look for Shanny, we submit. (Though this may be just our sense of style talking, since we have one of those beauties in gray, and this is just about the time of year to break it out.)

Remember a few years back when Jack Del Rio and Mike Nolan got the OK to wear suits instead of the baggy gym-teacher wear that coaches often sport on the sidelines? If Shanahan ever wanted to petition the NFL to give him dispensation, he'd have our support. But he's gotta wear the hat, though.

Update: Apparently, the Redskins press corps has officially gone stir-crazy, as the AP's Joseph White and CSN's Tarik El-Bashir faced off in a 40-yard dash, with hilarious results.