Players and coaches give their thoughts on the postponement decision by MLS.

With 700 D.C. United supporters in the stands after they were bused up from the D.C. area for the second leg of the MLS Eastern Conference Semifinal, officials announced that the game would be postponed due to the heavy snow falling in the New York metropolitan area, and the game would be played Thursday at 7:30 p.m. at Red Bull Arena.

The decision particularly disappointed D.C. United players and coaches, who went into the stands to thank the traveling support for making the journey. 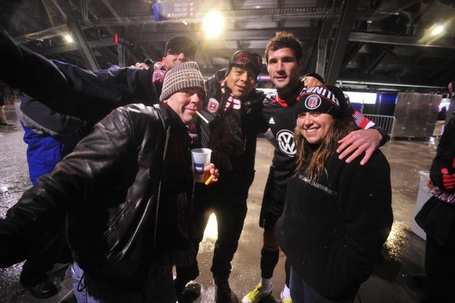 Below, a selection of quotes from players and coaches regarding the postponement

Olsen: "The game has got to go on at some point. We’ve done our part and changed games. It’s a playable field, from our end" #dcu #mls

Pontius: "A lot of the guys are angry. You’ve just got to bottle up that energy and that anger, and use it out on them tomorrow" #dcu

Thank you to all the #RBNY fans that braved the weather. Your loyalty is truly amazing. The players wanted to play, I will leave it at that.

Backe, if game went on: "Then it's all about luck... It’s a semifinal, the conference semifinal. It has to be more serious." #RBNY #DCU #MLS

MLS, which paid for the D.C. United supporters' tickets and travel after Hurricane Sandy forced the two sides to swap home dates in the tie, announced that the league and the Red Bulls would pay for United's bus trip home Thursday.

#MLS exec: "Looking at forecast over time, at no point was it clear there would be so much snow and have it come so quickly"

The rescheduled game will be broadcast on NBC Sports Network.