A closer look at the Wizards' rebounding woes

The Washington Wizards have all the size and youth in the world, yet the team's rebounding performance has been a disappointment this year. Who's at fault and how can they bounce back?

Share All sharing options for: A closer look at the Wizards' rebounding woes

The Washington Wizards are big. Really big, in fact. Depending upon how highly you value Earl Barron, you could make a legitimate case that the team runs seven deep with big men who are deserving of a rotation spot based on either their production or their upside.

Yet despite the team's size, depth, and youth, it finds itself ranked only 21st in the NBA in overall rebounding rate.

What makes the Washington's underwhelming performance particularly surprising is how good it should be. Perimeter players Bradley Beal and Jordan Crawford have both had excellent years on the glass, averaging 4.4 and 4.8 boards per 36 minutes, respectively, both above average numbers for a backcourt player. Small forward Trevor Ariza has also chipped in at an above average rate, giving the team 7.1 rebounds per 36 minutes this year.

Washington's problems begin with third year center Kevin Seraphin. At first glance the French import appears to be doing well, with his 8.6 rebounds per 36 minutes good for fourth on the team. However this doesn't tell the entire story. Seraphin's rebounding numbers are last among the team's primary centers (Nene, Okafor, Barron), and come with a poor on court/off court differential, as the team's total rebounding percentage when he's off the court is a full 3.4% better. Seraphin has all the tools - a strong base, good length, and above-average quickness - to be one of the league's elite rebounders, especially on the defensive end. There's absolutely nothing that defensive rebounding gods (if there is such a thing) Zach Randolph and Reggie Evans do to clean the glass that Seraphin is physically incapable of. Nothing.

Unfortunately, Seraphin isn't the only player on the team dragging down its overall rebounding performance. Using data culled from Nba.com/stats, I've assembled a chart showing each player's net effect on the Wizards' rebounding. The x-axis shows the team's net change in total, defensive, and offensive rebounds per 48 minutes when each player checks in. In short, if you see a lot of color on the right side of the graph, that mean's the team's rebounding is better when the corresponding player is on the floor. 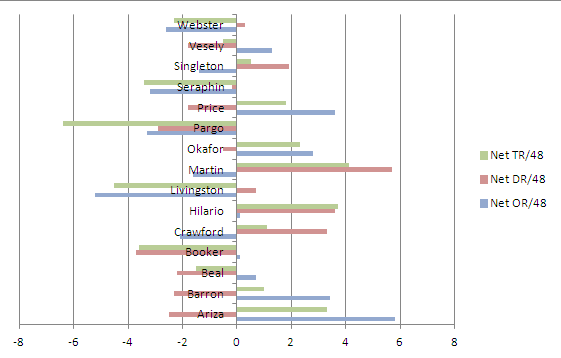 A few key facts can be gleaned from this chart:

Looking ahead, there are a few things the team can do to improve as a rebounding entity. More dedication and tutoring from Nene for Seraphin would be a good place to start. In addition to his physical tools, Seraphin's got a good head on his shoulders and is very coachable, so seeing him struggle like this is genuinely surprising. Continued development from Vesely and Booker should help, too, as will any strength gains made by Singleton as he continues to work on the power part of being a power forward.
The team could look to improve its rebounding performance by experimenting with its lineups and paying more attention to each player's strengths and weaknesses. For example, Vesely and Seraphin have both individually had a net negative effect on the Wizards' rebounding this year, yet the team's overall rebounding percentage of 55.3 and defensive rebounding percentage of 85.5 when they're on the floor together would lead the NBA.
Wizards Top Three Two Man Combinations, Total Rebounding
Wizards Top Three Two Man Combinations, Defensive Rebounding
Wizards Top Three Two Man Combination, Offensive Rebounding
(all statistics via NBA.com/stats)

Clearly, Vesely and Seraphin complement each other well when they're on the floor together, something that should give the team hope that the two of them can eventually form a decent frontline. Their relative success together could be due to Vesely's mobility and motor-fueled help defense, something which allows Seraphin to concentrate more on boxing out his man.

Ariza shows up a lot, too, when you look at the team's most successful two man rebounding lineups. As mentioned earlier, offensive rebounds that are available away from the basket tend to wind up in the hands of perimeter players who are quick, long, and have good motors. Ariza, for all his faults, is quick and long and a master at getting his hands on 50/50 balls. Crawford, while not normally thought of as a rebounder, has also excelled at getting these boards this year, and most of his success can be tied directly to his improved motor.

How the Wizards adjust their approach to rebounding will be very important to the overall success or failure of the franchise. Each rebound means one more possession. That means one more chance to put up a shot for an offense that has all too much trouble finding the net, for a young player in desperate need of NBA experience, or a potential trade piece that the team needs to showcase.