Another instant classic from one of Bethesda's finest.

So, the Washington Wizards defeated the defending NBA champion Miami Heat to improve to 2-13 on the season Tuesday night. Some might attribute the victory to the presence of all-conquering Redskins QB Robert Griffin III. Those of us with frontal lobes might point to the Heat shooting 29 percent from behind the arc, including Ray Allen (only the best 3-point shooter ever) going just 3-for-9 from downtown. Hey, to each his (or her) own.

But we would just like everyone to put aside their differences and enjoy this video of CSN's Michael Jenkins tooling on LeBron James and Company during the crossover to the Wizards postgame show Tuesday night. There was even more where that came from, but this was all CSN managed to snip for web use.

And then there's the Wizards Facebook page, which apparently mistook the Heat for a team that has beaten the Wizards twice already this season. 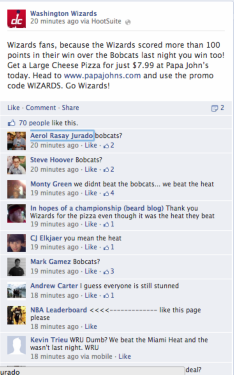