Catching Up With The Mark Turgeon Crew

Share All sharing options for: Catching Up With The Mark Turgeon Crew

COLLEGE PARK -- A few weeks back we met a group of Maryland students who decided to honor Terps men's basketball coach Mark Turgeon by dressing up in suits for the games. The crew chooses not to give themselves a name, and in an era of Facebook and Twitter, they want to keep a low profile.

"It's not about us, it's about supporting Coach Turgeon," sophomore Cory Frontin said. Frontin is one of four UMD sophomores that hail from P.G. County who don suits and ties for each home game to support the first-year coach.

Pics of the crew after the jump.

The guys all went to different high schools growing up, including Dematha Catholic and Eleanor Roosevelt, but they came together at Maryland to support Turgeon. Fellow students show love for the Turgeon Crew, whether it's in the dining hall or at games. 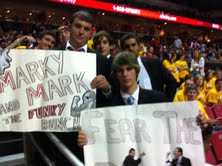 To properly salute Turgeon, the guys dump some baby powder on their hair before each game to create a gray spot. Turgeon has a similar grayish white spot in his salt and pepper hair. Since the advent of the Turgeon Crew, security at the Comcast Center has usually let the sophomores in with the necessary bottle of baby powder.

For whatever reason, security would not play along before Thursday night's game against Boston College. Jamie Morris, another founding member of the Turgeon Crew, improvised and told the guys to put the baby powder on while they stood in line to enter the arena.

"Everyone loves it," Morris said. Everyone, apparently, except those security guards.