We don't want to ruin Karl Alzner's burgeoning tough-guy reputation, but if we were asked to draw up a list of Capitals who would be most likely to serve media members cupcakes (unsolicited, mind you), No. 27 would be pretty high on the list.

And lo, we were proven right after Sunday's 2-0 win over the Toronto Maple Leafs, when the well-dressed Alzner dropped by the media room and started passing out cupcakes like some 6-foot-3-inch British Columbian genie giving out wishes.

Before we go below the jump, we should point out that Alzner wasn't slaving over a hot stove himself to cook these up. Per the Washington Examiner's Brian McNally, the sugary goodness came courtesy of Karl's fiancee, Mandy. 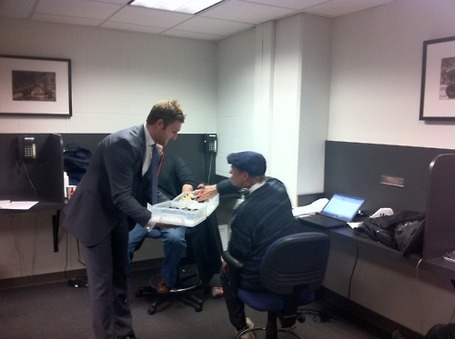 Here we have Alzner offering a treat to versatile Associated Press scribe Joseph White (who's not too shabby in the kitchen himself, as his colleagues at Redskins Park will attest).