PHOTO: How Is Alex Ovechkin's Bracket Holding Up?

Share All sharing options for: PHOTO: How Is Alex Ovechkin's Bracket Holding Up?

We're about 24 hours late with this one, but we couldn't let the opportunity to spotlight Alex Ovechkin's NCAA Tournament bracket pass. Almost everyone has focused on Ovechkin having Norfolk State making the Elite 8, which brings the total number of people making that particular prediction to one.

But it's entirely possible that there is a method to Ovie's madness. After the jump, let's take a look and see how he did through the first sixteen games of the tournament. 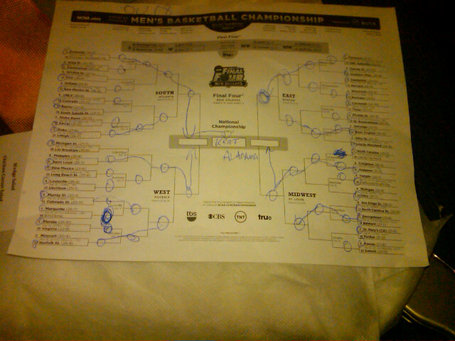 EAST REGION: Ovechkin started off strong by correctly predicting Syracuse and Vanderbilt to go through, but he went 0-for-4 on his other selections as Kansas State, Wisconsin, Gonzaga, and Ohio State made sure the chalk held. Not the best idea to have West Virginia going to the Elite Eight

WEST REGION: Perfect score for The Great 8 as he correctly predicted wins for Marquette, Murray State, Louisville, and New Mexico.

SOUTH REGION: Ovechkin went 4-2 in this regional as Connecticut and New Mexico State let him down badly.