Well, the 2012 NCAA Tournament left it late on the second day, but it finally gave us an upset to remember late Friday afternoon, when Norfolk State of the Mid-Eastern Athletic Conference defeated the Missouri Tigers, the No. 2 seed in the West.

If you weren't near a TV to experience the delight that resulted, go here and here. But that kind of euphoria and disbelief doesn't just stay on the court. Just listen to newborn star Kyle O'Quinn (26 points, 14 rebounds, one memorable postgame interview) describe the magnitude of this upset in the postgame press conference.

Norfolk's Kyle O'Quinn: "We even messed up my bracket."

O'Quinn has turned himself into an overnight media sensation not only because of his performance, but because of his wide-eyed joy at it all. But this is a team event, and so we have to give a final salute to Norfolk State's win by showing this photo of the team celebrating in their locker room. 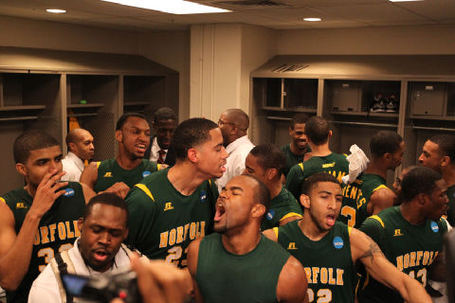