Hawks Vs. Wizards: Andray Blatche Works Out With Bricks

Share All sharing options for: Hawks Vs. Wizards: Andray Blatche Works Out With Bricks

WASHINGTON — IMPORTANT: This post contains visual evidence that Andray Blatche doesn't just work out in the wee hours of the morning.

Two hours before the Hawks and Washington tip off at the Verizon Center, Blatche was the only Wizard on the court, and he wasn't just shooting. He was running from baseline to baseline and shuttling across the court — carrying a pair of bricks. 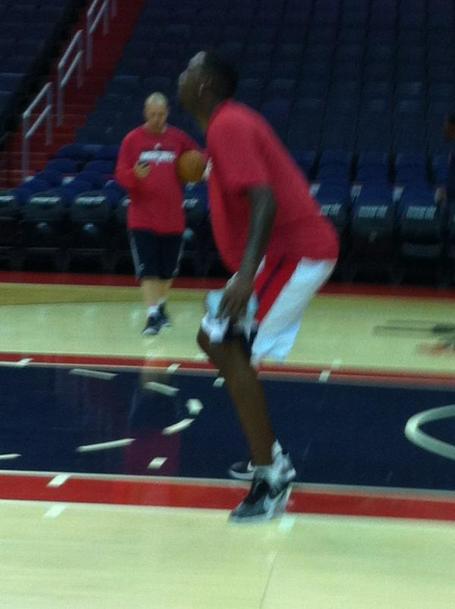 Okay, you've already made the joke to yourself/roomate/Internet friends. (You know the joke I'm talking about.)

But let the record show SBNation.com editor Matt Watson made it first:

The Wizards shut down Blatche and told him to focus on getting into better condition. Head coach Randy Wittman said he's been encourage by Blatche so far, but that he's more interested in whether Blatche keeps it up.

Wizards developmental coach Joe Connelly was kind enough to let me hold the bricks and, as he pointed out, they're not that heavy. But it is pretty great to run through workouts holding some bricks — pure Rocky montage stuff. And that could be a little mental boost for Blatche, which could only help as he works to get into acceptable shape.

Keep up with the latest updates and highlights on this game with our Hawks vs. Wizards StoryStream. For terrific fan perspective, visit our Wizards blog, Bullets Forever.