Share All sharing options for: Logan Thomas Is Not Pleased With Virginia Tech's 'Bird Feet' Helmets

Virginia Tech football held its Media Day on Saturday, which doubled as a perfect time for the equipment staff to unveil the team's new swag. In this case, the new swag turned out to be the three football helmets that the Hokies will wear this fall. 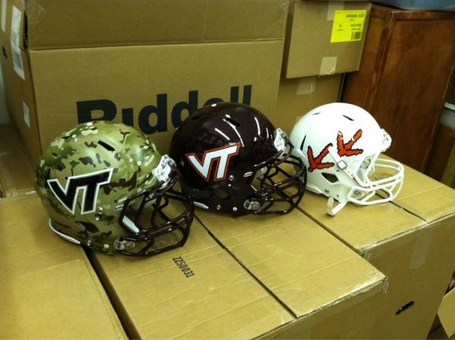 Obviously, the traditional helmet in the middle will be worn most of the time. The camouflage helmet will be worn on Sept. 22, which Virginia Tech has designated as its Military Appreciation Day.

We're less clear on how often Virginia Tech will wear the white turkey-track helmet on the right. The schedule lists a "White Effect" game against Austin Peay on Sept. 8, but is that really the only time the Hokies are going to break that thing out?

Regardless, Virginia Tech quarterback and Davey O'Brien watch list resident Logan Thomas has made his position on the helmets known loud and clear.

Our whiteout helmets are so ugly

Well, maybe it will be just for one game after all.