Tuesday was the final open practice of Redskins training camp out in Ashburn, the last chance for fans to see Robert Griffin III & Co. put through their paces before the gates at Ashburn are shut to all except the media.

So, the region's other football team (D.C. United), decided to roll on out to Loudoun County and check out what was what.

It wasn't long before some cultural exchange and understanding occurred, as reported by the Examiner's Craig Stouffer

Roy Helu meets #DCU after #Redskins practice: "I'm a huge soccer fan. When does your season start?" Is a Euro fan, to be sorta fair.

And there was more.

Helu with another zinger: "You guys play at same stadium, right? #DCU #Redskins

I think Roy gets partial credit for that. And of course, there was the inevitable RGIII photo-op. 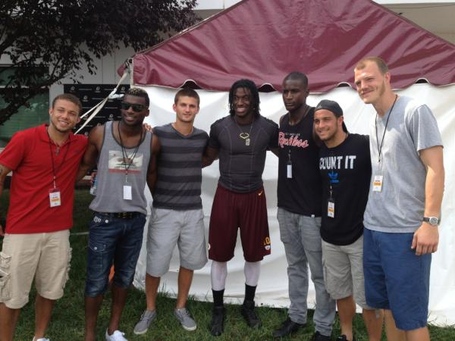 For the record, those players are Brandon McDonald, Danny Cruz, Perry Kitchen, and Bill Hamid, among others.