At first glance, D.C. United's trade for Lionard Pajoy of the Philadelphia Union is a bit of a head-scratcher. Even allowing for the fact that United is desperate to not only return to the playoffs, but make a run at the MLS Cup, trading a 22-year-old midfielder for a hit-or-miss 31-year-old striker might seem to be too desperate by half.

We should note that not everyone feels this way. Here's what Martin Shatzer had to say at SB Nation's D.C. United blog, Black And Red United.

Cruz was a popular player for his work rate and attitude, and rightfully so. But we need to keep the end goal in sight. The goal isn't to have the most likeable team, is it? The goal is to win the MLS Cup. If [D.C. United head coach Ben] Olsen thinks this gets us any bit closer to that goal, it's worth it.

Naturally, not everyone agrees with Martin, as the photo that you're about to see shows. 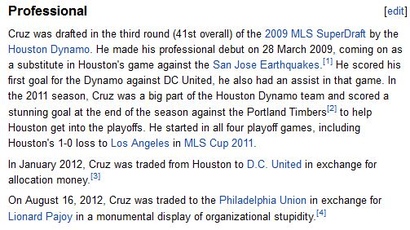 OK, then. (Via Brotherly Game and @Philanova06)